The Thai Dowry you pay in Thailand for your wife to her parents has a long tradition in Thailand. This is done for a number of reasons the first being to show the family that you have the ability to take care of her but also to compensate the family for the loss of their daughter. Daughters in Thailand are normally the ones who look after the parents when they get old. The parties to the marriage would normally negotiate a price. The parents would put down an offer and you would have to make a counter off. 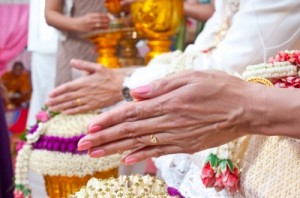 There are a number of issues the first being gaining face within the community. If they can get 500,000THB as a dowry then they would appear to be well off in the community. This is usually where the first problem occurs. It would be common to place the money down as dowry and after the ceremony when nobody is looking to give back part of the money. Many times none of the money returns. Now you might think that this is a foreigner issue but I recall one day a woman I worked with who was paying off a large debt. I asked her what she did with the money and her reply was –

My husband was no rich but my parents wanted a large dowry, so we borrowed the money. Mama was supposed to give most of it back but she did not. Now we have to pay back a huge loan.

The tradition is starting to fade for some but not all. Some will put themselves into debt while others will spend years living together as man and wife without getting married to save for the Sinsot. Some pay their dowry and others don’t. Personally I don’t know of any foreigner who has ever paid a dowry while living in Thailand. It’s a bit of a hit and miss in Thailand which depends on the family.

How Much Should you Pay?

How long is a piece of string? That’s about the correct answer to the question. It normally breaks down to the class of the family, levels of education of their daughter and also her career. These becomes important. I have heard of a Thai man paying 2million baht as a dowry for his Thai wife from an upper middle class family. Then again I read of an Australian who paid 1 million baht for a woman of the night (she ran off afterwards but that is another story). Normally your average middle class Thai could give you an idea of what they would consider to be reasonable. This is a good way to start. A Thai will know a Thai just as a foreigner will know another foreigners class. In Thailand you are like a fish out of water and need guidance.

If you are going to use a lawyer for your marriage registration in Thailand then speak to your Thai lawyer as he/she will have a pretty good idea of what is reasonable in your case.