Cross cultural marriages do come with their fair share of problems. We know this as it was a Thai judge in Issaan that spoke about expats and their divorce rates in rural Thailand. It was the first and last time that the Thai media made mention of the issues with cross cultural marriages in Thailand. The most common problems in Thailand by the looks of things would be the following: 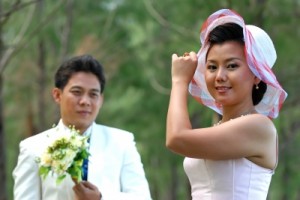 When I first moved to Thailand I moved into an apartment complex in Bangkok and lived across the way of a couple who had been married for a while. He clearly was not adjusting to well to Thailand and she appeared to have her own ideas of what a farang marriage should be like. Asians are maternal and the wife normally manages the household affairs. He did not buy into those views and would buy things he likes. She would then go completely ballistic about what he bought. You could hear her far away as she would shout at the top of her voice. Then a few glasses would be broken and the door slammed. She would return the next day all cool and calm for the next week or so before it was all fun and games again with another mini war.

This is really the weak point of Thai society. No matter how many times the police crackdown on gambling in Thailand it still remains a major problem for Thai’s. I think I have heard more sad stories of people losing their homes, jobs and land with gambling debts. It is really sad to watch people who are addicted to this and how it slowly destroys their lives. When you sit on beach Road in Pattaya and the women talk most times it is about their mother or father running up massive gambling debts which they are now trying to pay off. They don’t get very far as the parents simply gamble away what gets sent home instead of paying off the initial debt. It is by far the most destructive issue in Thailand next to drugs.

If I had a dollar for each time I heard of one of these in Pattaya I would not need to work ever again. Pattaya was an odd place to live and this would be a regular occurrence in the apartment block. The landlord was a foreigner and he would just roll his eyes to the back of his head. I would get a good giggle out of it as it was always the same process. Just before the breakup suddenly she was pregnant. The response from the guys had always been even funnier. That blank stare was too funny for words.

The buffalo is sick was the most common one many years ago in Thailand. As Thailand became more modern it was the Kubota (Japanese brand tractors in Thailand) needed wheels. Much like the article on marriage scams in Thailand the issues many times comes from their parents who place pressure on them for more cash.

Most of these women worked in the industry and many time they are emotionally and spiritually broken by the time they meet Mr Right. Like any damaged goods, you have to be good with glue and cello tape if you really want to make it work. Just don’t lose your money or your mind.