The traditional Thai wedding has been described on this website here. This wedding ceremony is a bit older and is not used in Thailand except for a few people who still like the tradition. Political correctness and feminism has caught up in Asia where this tradition is not seen as out of sync with ‘modern society’. You will see in a minute why. The tradition in the village would start at the bottom of the road or a few houses away from where your Thai fiancée would be living. You would walk up the road and open a gate at each house. 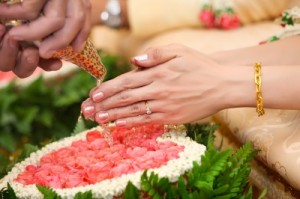 When you open the gate you would give the person a small gift. As you got closer to the home of your fiancée the gifts would get bigger. Over the years this was turned into a fabric chain or rope held by the sisters of your fiancée. At each link of the chain the sister would ask you if you could take care of their sister and their family. You would then give each sister an envelope of money. Much like the opening of gates the more modern version of it would be done at your fiancées home normally outside the house. You don’t find this much in Thailand any longer.

Once you get to the end of the chain they will start another part of the ceremony. This is where you would stand on a chair and your fiancée would bow down before you on her knees and wash your feet. This being is symbolise her respect for you. With today’s ‘modern world’ you are not going to find this much either.

Once the two ceremonies are done you now have to pay the dowry. The money is normally spread out over a carpet to show the guests that you have paid the dowry. The amount of dowry normally depends on many factors. The standing of the family in the community, levels of education and other factors. Thailand being Thailand you would at times see this giving rise to problems that nobody expected. See the article on dowries in Thailand and see what you can learn from others mistakes.

Once this is complete there is the final ceremony. You and your Thai wife would sit on chairs with a garland around your necks and each guest would come and tie a string around your wrist and pour water onto your hands and that of your Thai wife. This is still done today in Thailand. Each guest will then hand you an envelope filled with money. This part of the ceremony is still much in fashion today in Thailand. They might not do the other parts of this tradition but this is still done. From here they would follow the traditional wedding ceremony with the monks as described on this website. So if you ever see a foreigner at Thai immigration or at Thai Foreign affairs with strings still around his wrists, then you know he got married in this tradition.