This is about Traditional Thai Wedding Ceremonies. Over the years Thailand has become a hotspot for marriage ceremonies even from other Asian countries. These have not only been Buddhist weddings but also Christians and Muslims marriages. The traditional wedding ceremony in Thailand is not legally binding and you would need to register the marriage in Thailand once the ceremony is complete. Unlike the West you don’t even need to have the wedding ceremony in Thailand and you can simply apply for the marriage certificate without having had a ceremony. 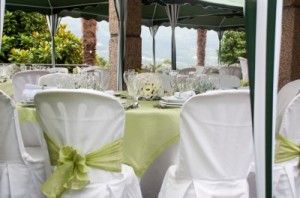 The first process in Thailand with a traditional wedding is normally when you approach the family about the Sin Sod or marriage dowry. There is a complete page on the dowry in Thailand, its meaning and how this is normally done. Today in modern Thailand this is mainly a process under the local Thai’s when they get married and rarely is this part of the process when it comes to foreigners getting married to a Thai national.

The day before you get married in a traditional Thai wedding ceremony you would have what would be the equivalent in the West of a pray meeting with the monks. You do not need to dress up for this occasion. Normally there would be 9 monks sitting in a row on a long mat. You and your Thai fiancée would sit oppose them facing them. You would sit together as a couple opposite the first monk. This monk will have a tray or bowel filled with water with a candle in the middle. The water in the bowel is kept for the following day. During this process which is very interesting the monk would pray and wave his fan. While the other monks are praying the first monk with wrap a string around the head of you and your Thai fiancée. These strings once completely wound around you head will then be unwound into the monks hand and kept for the following day. Once done the monks will go back to the temple and begin the wedding ceremony with the water from this ceremony.

The following day the 9 monks will return and take the holy water from the day before and sprinkle the water over those who are present at the wedding ceremony. On your wedding day you will also be dressed in your traditional Thai weddings outfits. The monks will line up again as the day before and start praying again. The monk will take the string from the day before and wrap it around your heads again. This time he ties the two strings together joining you and your Thai fiancée by the head. As the day before they are seated in a row but on your wedding day there is now a tray in-front of each monk. They are not allowed to touch any money so you have to place your donation into an envelope and place an envelope on each tray.

The wedding ceremony is now complete and you are now married in Thai custom. Over the years certain customs have changed and this today is what would qualify as a traditional Thai wedding. If the parents are very traditional they might want a combination of ceremonies as there is also the Door Ceremony which most don’t do today except for the real traditionalists.